Blue, a Little Low, and Somewhat Slow
The first contest day for the 31st Anniversary edition of the Seniors Soaring Championship is in the books tonight. The weather forecast for the day was quite a bit different than the past 10 days at Seminole-Lake Gliderport. We had great flights during the Sailplane Grand Prix and early Senior arrivals with cloud bases close to 6,000ft and 5-8kts of lift. Today was a very blue day, where climbs to 4,500ft were very well received by the pilots. We were also lucky due to the large number of bald eagles flying today. You have to admire these wonderful creatures, they saved me from landing out several times during my flight. I also enjoyed the long conversation with Lakeland tower as I invaded their Class D airspace for a time. I did get a laugh from the controller when I invited him for a glider ride. Guess when your low, talking to a tower controller about the possibility of a landing at his airport because you cannot stay airborne, and asking him if he wants to go for a ride was pretty funny.
Today was a day to start early due to the high cirrus that was expected in the early afternoon. John Good, our CD, sent us out on a 2-hour TAT that was challenging but very makable. Climbs in the start area were good and everyone was off to the races very fast. In one of the early thermals there was a large number of gliders. I was hoping someone would take a picture to document the beautiful sight, but I hoped they were in the back seat. We really miss Ben Johnson, our air-to-air photographer, and his pilot Jim Garrison.
Everyone got low at some point during the task, but how you handled digging out of a hole separated the middle of the score sheet from the top. Jake Alspaugh in his trusty ASW-27 blazed the sky with a raw speed of 56.27mph, handicap speed 49.43mph over 123.4 miles. John Seaborn finished second and the team of Nico Bennet and Ryszard Krolikowski finished third.
What the pilots did not know was their crews were having a wonderful time while we were flying. Several were found on the grid parking area over an hour after the pilots were on task. Getting to renew friendships is an integral part of contest flying. For us pilots we enjoy the company of other aviators. But our crews are also happy to catch up on families, friends, kids, and pets. By the way, there are several new puppies on the grid this year. I had the pleasure to meet Peanut, a good looking female Affenpinscher that owns a human named Sandra Danoff. If you saw me rolling around in the grass the other day, it was because I was teaching a cute Beagle puppy named Scout that you don’t have to bark to get attention. I’m sure Susan Buchanan thought I was crazy. The gliderport dog, aptly named Seminole, has found that getting let loose around 6pm in the evening yields many treats from the overly generous glider folks.
Today might have been the first contest day but it marked the end of registration. Our fantastic volunteers of Michelle Sorenson, Bo Michalowski, Laura Betzoldt, Susan Owen, and Leigh Zimmerman made the process enjoyable and painless. They were led by Chris Carter who has held the position of Chief Registrar for the last several years. Nothing can help a Contest Manager more than a partner who runs an operation from start to finish without any guidance from the contest staff. It is always a pleasure to work with Chris. See you in Cordele young lady.
Today was a milestone in the Seniors. This is the only first contest day that 100% of the field was weighed. Scores cannot be counted as “Official” until handicaps are established. Weighing all the aircraft is a big job. Ron Ridenour, Don Kroesch, Ken Sorenson, Dan Reagan, and our Operations personnel Charles Peterson and Jack Brinckerhoff did an outstanding job.
Funny thing that happened to me tonight, this post was done several hours ago right before our dinner. Just when I hit “Send”, it disappeared into the ether never to be seen again. So, I learned this lesson again, always do contest report posts in word and paste it into the blog.

Good Night and we will talk tomorrow. Until then, Fly Safe, Stay High, and Come Home!
Rich
Posted: 3/13/2021
Mainly Blue with a Hint of CU
The second official day of the 2021 Seniors is in the record books. Our ground crew is starting to hit their stride and the launches are progressing very well. We had a girl launch crew on one line and a young man launch crew on the other line. Bill Foster, our Operations Chief would not reveal who had the most ships launched per hour. The biggest thing is everyone got airborne safely and the kids had a great time.
The forecast projected a blue day but, unless a cold front moves though, it is hard to get a truly blue day with southeast winds. The CD sent us for a two hour Turn Area Task (TAT) expecting the day to end early. Our journey took us from Start A, to Streamsong, which is a very high-end golf resort in south central Florida, Midway Lakes….always a very weak area , Gore, Burntwood, and Finish. When the launch started, small CU’s started to form but disappeared within a couple of minutes. The cycling of the CU created problems for some of the pilots, including me. If you were in synch with the clouds, your runs were great. When you were caught down low in the down cycle, it was tough and you never could seem to get back up to cloud base. The area around Winter Haven is pretty much a series of lakes with a town right in the middle of it. The fleet took two different paths around the lakes. The pilots who went north of the lakes seem to do better than the southern route. Fernando Silva took first place with a raw speed of 62.81mph over 163 miles. Jake Alspaugh finished in second with Michael Marshall, flying as a member of Team ZO, took third. Michael is a doctoral student at Caltech in Pasadena, California and this is his second Seniors as a Guest.
After flying you would think all the pilots would have had enough of sailplane flying for the day. Seems like Bif Huss (H7) had a small group by his RV showing “A Fine Week of Soaring”. It is rumored that adult beverages were being served until the mosquitos took over the airspace. In other insect news, the staff at Seminole-Lake Gliderport get a kick out of the visitors to Florida that find the size of our bugs absolutely shocking. The local alligator hasn’t made an appearance this contest yet but I’ve heard him in the wetlands in the evening. You do not really want to wander around the southern end of the runway at night. Well, it’s time to call it a night. See you on the grid in the morning.
Rich
Posted: 3/15/2021
An Unfortunate Day at Seminole-Lake Gliderport
The contest day on March 16th looked like a great day to fly. Cloud bases were expected to be just under 6,000ft with lift being strong and consistent. As the launch proceeded, Tom Johnson in his Mini Nimbus had an incident during the launch. Tom was air lifted to the Osceola Regional Medical Center where he has undergone two surgeries to repair a number of injuries. Tom’s wife is with him at the hospital and we all pray for his speedy recovery and return to his glider family.
All launches after the incident were terminated and the contest day was cancelled.
Sincerely,
Rich
Posted: 3/17/2021
2021 Seniors Soaring Championship Awards 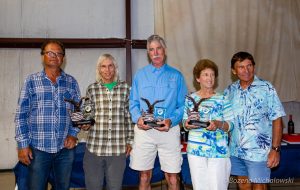